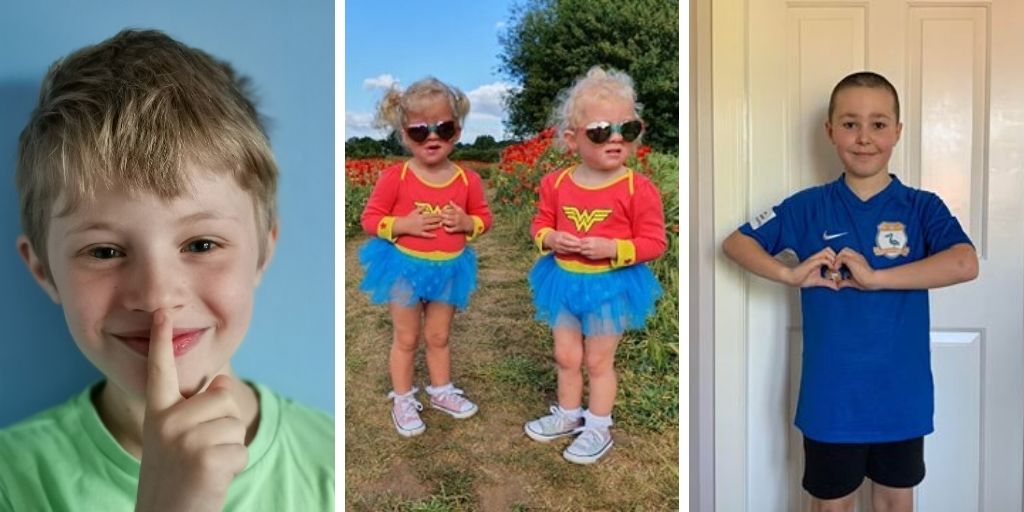 These youngsters are among the growing number of fundraisers to complete sponsored challenges in support of NHS staff, volunteers and patients.

Two-year-old twin girls, Isla-Rose and Lily-Mae, have been walking a marathon over the course of a month, in colourful fancy dress costumes, to raise money for our appeal. They have been dressing up as lions, tigers, giraffes, dinosaurs and Wonder Woman as they walk around their local area, raising over £1,000 and cheering up their neighbours.

Isaac, seven, completed a sponsored silence from 8am until 8pm on June 13th to raise funds for our appeal. Armed with flashcards and a pen to communicate, Isaac managed to raise a brilliant sum by vowing to stay silent all day.  Isaac’s mum Rebecca says he is a “real chatterbox” and this made his sponsored silence even harder!

Speaking of her son’s fundraising, Rebecca said: “He’s never done anything like this before and his sense of achievement is through the roof! He is so proud to have been able to raise money for you and we hope that it will make a small difference.”

Rhys is 10 years old and Manchester City’s number one fan! He was missing his favourite game so much, his grandad challenged Rhys to run the distance from his house to Etihad Stadium, home of Manchester City. Rhys set an original target of £159, as this is the distance in kilometres from his house to Etihad Stadium, and smashed it to raise over £700 in total!

We would like to say a huge thank you to these youngsters and all our fundraisers for choosing to support the appeal.

Grants given to NHS charities are used to meet the immediate and urgent needs of patients, staff and volunteers. Funding is also going towards helping partnerships outside hospitals, such as hospices, community healthcare and social care, making sure patients leaving hospital have access to the care they need to recover. In the longer term it will also fund programmes to help staff and volunteers recover fully once the crisis has abated, reducing the long-term impact on them and the people they care about.

About the Urgent Appeal

The NHS Charities Together Urgent Appeal acknowledges and supports NHS staff and volunteers caring for COVID-19 patients. It has been put together in liaison with NHS England and national bodies, our member NHS charities and national giving platforms. Click here to donate.