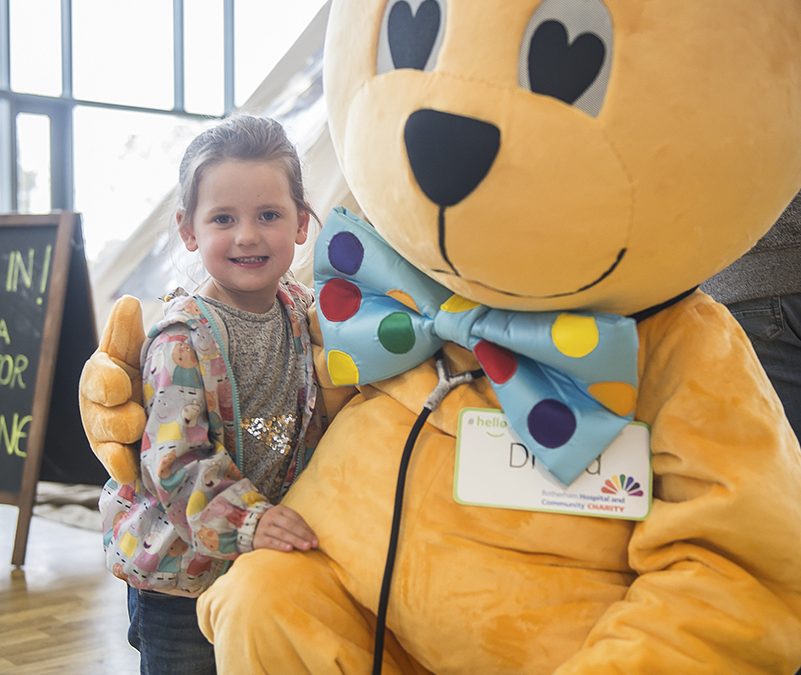 Meet Dr Ted – he’s the new ambassador for the Rotherham Hospital and Community Charity’s children’s appeal and was unveiled recently by the Mayor of Rotherham.

The charity’s re-designed bear mascot made his first public appearance alongside his biggest fans, Cllr Alan and Sandra Buckley, at a bake sale at Rotherham Hospital held to boost the Mayor’s Charity Appeal by more than £500.

Cllr Alan Buckley, who is raising funds for Dr Ted during his mayoral year, said: “When Sandra and I began our year as Mayor and Mayoress last May, Dr Ted was still a pipe dream so we were honoured to see him for the first time at our fundraising bake sale.

“We think Dr Ted is fantastic, especially his dance moves. We hope he will raise a smile amongst children and adults alike and inspire more people than ever before to raise much needed funds for the NHS charity.”

The furry yellow bear will support the charity’s fundraising for resources, equipment and projects which benefit The Rotherham NHS Foundation Trust’s youngest and most vulnerable patients.

The 6ft, furry yellow bear will be the main attraction at events hosted by the charity at Rotherham Hospital and in the community. The charity also hopes individuals, schools and organisations organising fundraising activities will invite Dr Ted along to help raise awareness about the difference the charity makes.

The Dr Ted children’s appeal has raised £80,500 since it was set up in April 2012, examples of what the appeal has funded include:

Barry Mellor, Chair of the Charitable Funds Committee, said: “Thanks to the support of the Mayor and Mayoress and fundraisers such as RUFC’s NCS teams our Dr Ted children’s appeal is going from strength to strength.

“It has been a real labour of love bringing Dr Ted to life. We wanted a friendly, cheerful, colourful and fun mascot who would instantly make patients of all ages smile and feel more comfortable during their hospital stay. From the wonderful reactions we’ve had at the Mayor’s Charity Appeal fundraiser, I think we have definitely achieved that.”