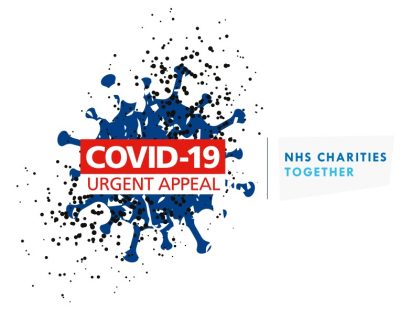 Ahead of the NHS Birthday this Sunday, NHS Charities Together and NHS England are joining staff and volunteers from across the country to say thank you to everyone who has donated or raised money for the Covid appeal.

Shelley Scarlett-Mckenzie, a healthcare assistant at Huddersfield Royal Infirmary and one of the staff supported by the money raised, said:

“Thank you to everyone for all your kind donations. It was really appreciated and brightened some of the darkest days I have ever faced whilst working in healthcare.”

Since launching in March, the appeal has raised a staggering total of £130 million and more than £30 million has already been made available to local NHS charities to support NHS staff, volunteers and their patients as they tackle the Covid crisis.

Donations have come from all corners of the community, driven by inspirational fundraisers like Captain Tom and two others from opposite ends of the age spectrum – 18 month old Beatrice George and 90 year old Margaret Payne. Margaret has raised an incredible £350,000 climbing her stairs at home during lockdown, while Beatrice has been sponsored for more than £1,300 to do daily pebble hunts.

The funds have been used to meet the immediate and urgent needs of staff, volunteers and patients as well as helping tackle the longer term effects on health and wellbeing – providing nutritious food and drink, somewhere comfortable to take a break during long shifts, supplying electronic-tablets so patients, staff and volunteers can stay in contact with friends and family, “wobble” rooms and specialised psychological support for staff struggling with stress, trauma and separation from their loved ones as they battled the virus.

Janet Cave, the niece of a patient being treated at Heartlands Hospital, Birmingham, said:

“My uncle, who has Parkinson’s Disease, was fighting the virus at Heartlands Hospital, and it was the darkest of times for us, made worse by the fact I couldn’t be with him. When I received a phone call offering for my uncle to be the first to use Skype on a tablet computer bought with funds from the national Covid Appeal, I was delighted.

“The joy on my uncle’s face when he saw me for the first time in weeks, was the most amazing thing. The face-to-face interaction was so important. It was like giving him a virtual hug and I could see he was getting stronger. That was hugely reassuring for us as his family too and he did so well he was discharged from hospital. I can’t tell you what that meant to me and I am certain that tablet computer helped him pull through.”

Local NHS charities have widened the scope of the support they are providing, to help vital partnerships outside hospitals, such as hospices, community healthcare and social care, making sure those vital support services and organisations are resourced to provide the care to patients, volunteers and staff.

They are also providing additional support where it is most urgently needed by NHS staff, volunteers and patients in their area, with a focus on support for people who are disproportionately affected by the Covid crisis, such as patients and staff from BAME communities and high-risk groups like those living with disabilities.

In the longer term the money raised will also fund programmes to help staff and families recover fully once the crisis has abated, reducing the long-term impact on them and the people they care about.

Ellie Orton, CEO of NHS Charities Together, is bowled over by the response from the public:

“When we started the appeal, we never imagined we would hit a total like this in just a few months. On behalf of all our member charities and the NHS staff, volunteers and patients they support, I want to say a huge thank you to everyone who has made that possible, your generosity is making such a difference.

So many people have been there for others during this crisis. That’s why, in partnership with NHS England and the Together Coalition , we’re asking you to invite everyone you know to join the nation at 5pm this Sunday in a huge show of appreciation for everyone who has kept us going.  We’d love you all to raise a glass (or cup of tea) for our NHS staff, your local volunteers, vital keyworkers or someone who has just been there for you.”

“On behalf of all the staff and patients who have benefited, I’d like to thank everyone who has led or contributed to this massive fundraising effort, which is already making a difference across the country and will continue to do so for years to come.

“This year has been the most challenging in NHS history and our colleagues have gone to extraordinary lengths to care for all those who have needed it, but we haven’t done it alone, and the public’s support has been vital – whether raising money for added extras, volunteering in their local community, or simply staying home to stop infection spreading.

“So as we mark the NHS’s birthday this Sunday, I hope the nation will join health service staff in coming together to applaud the commitment, courage and sacrifice shown by so many people in so many ways over the last few months.”

NHS Charities Together has partnered with /together and NHS England to encourage everyone to get involved in a moment of appreciation at 5pm this Sunday and clap for everyone who has been there for them during the pandemic and then stick around for a little bit longer – to share the memorable moment at a safe distance with friends and neighbours. The charity has produced a pack to help make the most of the moment and you can download it from nhscharitiestogether.org.uk.

More information is available on: www.nhscharitiestogether.co.uk