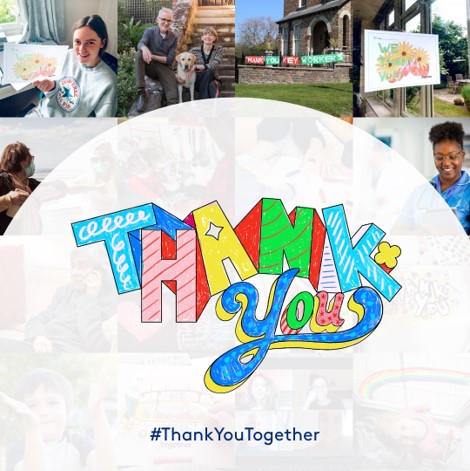 We’re joining the call for everyone to get together for the NHS’ birthday on July 5. Our CEO, Ellie Orton, is a signatory on a public letter,along with a host of other individuals, encouraging all to take part in the biggest thank you. The letter highlights the debt of gratitude we owe to the nurses, doctors, physios, porters, cleaners, and countless others who have delivered for patients and their families along with all those in the care sector, and states that we are also hugely grateful to the shop workers, transport staff, delivery drivers, teachers, refuse collectors, farmers, armed service personnel and other key workers who have kept the country going. It will also be a chance to thank all those who have stayed home even when the sun shone, the people who volunteered who helped their neighbours with the shopping or washed their hands more often.

Read the official press release on the biggest get together below and get involved. Let’s make the NHS’ birthday the biggest thank you in our history!

Everybody across the country is being encouraged to come together on the birthday of the NHS, Sunday 5th July, to thank not only NHS staff but all key workers, good neighbours and all those who are helping to get us through this difficult period.

The NHS has been working with the newly founded /Together coalition to build a national moment where we can thank everyone who has helped them – and one that aims to reinforce the social connections we will need to get through the next stage of the crisis.

In a joint letter published today (Wednesday, June 10) dozens ofindividuals and groups have voiced their support for making Sunday 5th July a day to bring people together to connect with neighbours and their communities, to say thank you to all those who are helping us through the Covid-19 crisis.

Supporters of the initiative include grassroots community leaders, carers, emergency workers, sportspeople, religious leaders, celebrities and organisations including the CBI, trades unions, the Scouts and Guides. Among those supporting the day are:

The two key moments during the weekend will be:

“Over recent months our nurses, doctors, therapists, support staff, paramedics and countless other NHS colleagues have had to contend with the greatest challenge in the health service’s history. But we could never have done it alone, and we’ve been helped and sustained by fellow key workers and by carers and volunteers who together have looked out for others and kept the country running.

“So as we mark the NHS’s birthday we want to say a huge thank you on behalf of the whole NHS to all those who have played their part in tackling this horrible coronavirus pandemic. To the teachers, care staff, transport and shop workers, as well as the armed forces, volunteers and local authorities. And in particular, thanks to the public whose support has meant so much – from the children who put rainbows and NHS signs in their windows, to all those who saved lives by staying at home to slow the spread of this terrible virus.”

“Over the last ten weeks millions of people came out to clap those who went to work so we could safely stay indoors. Now is the time to expand this gratitude and acknowledge everyone whom has and is still helping us through this crisis.

“Thursday nights were a moment to show our appreciation but also became a moment to check-in with our neighbours and have some human contact.

I hope we can make the 5th July a day which unites us in a countrywide ‘Thank You’ and that shifting the moment to earlier in the day will mean those kids who go to bed before 8pm can really take part. Uniting, coming together and the acknowledgment that we all need each other is something we need now more than ever.”

“This crisis has in many ways made us more grateful for each other and more indebted to the workers who put themselves at risk to keep our country running and protect the vulnerable. It has shown people at their best – volunteering, helping neighbours, protecting those at greatest risk, pulling together as communities to support one another. My sincere hope is that this weekend will serve as a powerful moment of remembrance, thanks and connection, as we come together and commit to helping to create kinder, closer more connected communities.”

“At a time when there is so much emphasis on what divides us, giving thanks and connecting with our communities is one of the things that unites us. I hope we can all take a moment to mark it and be part of building the closer communities that we’ll need in the future.”

“The NHS’s birthday is an important moment when we say thank you – to staff across the health service, but also to all those who have supported us as we’ve been tackling the coronavirus pandemic. Everyone’s had a part to play, and community spirit has been one of the few positives of this time. Throughout its history the NHS has brought the whole country together, treating everyone based on need not ability to pay. So we’re honoured that the /Together coalition have chosen the NHS birthday to pull the country together.”

This crisis is causing immense hardship and suffering – many people have lost loved ones, are struggling with their own physical and mental health and are facing acute financial pressures. It has come at a time when we were already struggling with rising loneliness, profound inequality and divisive political debates. But we also know that this crisis has in many ways shown people at their best – volunteering, helping neighbours, protecting those at greatest risk, pulling together as communities to support one another.

New polling for the /Together campaign has shown the country feels more connected than it did prior to the crisis. Some 6 in 10 people (60%) say that “Overall, the public’s response to the coronavirus crisis has shown the unity of our society more than its divides.”  Just 15% disagree.